The Hungarian Society for Angiology and Vascular Surgery was established in 1966 by vascular surgeons and angiologists. SInce thenthese two specialties have been working in close cooperation for the best interests of patientswith peripheral arterialdiseaseand venous disease. As treatment strategies of vascular diseases have changed and multidisciplinaryapproach has developed, our societyexpanded and we built close cooperation with other societies e.g. interventional vascular radiologists, cardiologists, diabetes specialists. We have a national congress biannually and continuouslystrengthen our relationshipwith international organizations such as ESVS, Vascunet. We also emphasize creating strong connections between the societies of our neighbouring countries.

The Romanian Society for Vascular Surgery (SRCV) was founded in 2013 with the aim of harmonizing the treatment, protocols and guidelines in all the vascular centers in Romania http://www.srcv.ro/. The purpose is to improve the quality of vascular treatment and to update the training for future vascular surgeons. Counting 117 surgeons and trainees, the Romanian Society is an integrated part of ESVS, being one of the most represented societies. Our members are present as representatives in the ESVS committees (European Section and Board of Vascular Surgery or ESVT, ESVS Academy and Vascunet). The Romanian Society for Vascular Society had the leading role in establishing the Committee of Vascular Surgery at Romanian Medical Council, one of the main factors in the decision-making process.

Between the 19th-21st of October, 2022, the fifth Annual Meeting of  the Romanian Society for Vascular Society will be held in Sibiu, Romania www.srcv-events.ro.  Among the meeting’s highlights are five courses: Carotid Ultrasound, Venous Ultrasound, Basic Endovascular Surgery, Basic Suturing Skills In Vascular Surgery, Wound Managent. We are also delighted to have amongst us a number of keynote lecturers well renound in the european vascular community. We take this opportunity to invite all vascular surgeons to attend! 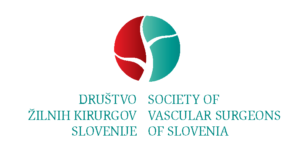 The Society of Vascular Surgeons of Slovenia was founded in June 2007 with the aim of »…preserving,protecting and improving the health of patients with vascular pathology and advancing knowledge, skills,and research in the field of vascular surgery«.But since at that time vascular surgery was not acknowledged as a separate surgical specialty in Slovenia this was also set as a major goal of the Society. The first president was prof. Vojko Flis who organized a remarkable vascular center at his University hospital in Maribor, where surgeons from other general hospitals came to improve their vascular skills and knowledge. Another honorable member of the Society, prof. Tomislav Klokočovnik from the University Clinical Center of Ljubljana made also a great contribution to the vascular society by mentoring many general surgeons who struggled to enter the field of carotid and aortic surgery. In 2012 the president elected became prof. Mladen Gasparini who is also the actual president. With the help of supporting vascular friends from the USA (prof. Igor Gregorič), EU (prof. Michael Jacobs), and from the Slovenian vascular community he started a winding path toward the affirmation of vascular surgery as an independet specialty. He succeded in 2018 when the specialization was formally acknowledged and the first residents started their uncertain path toward a modern vascular specialist. Today the Society is composed of 43 specialists and 11 residents. Every year a national meeting is organized with the aim of presenting and debating different scientific and organizational aspects of the complex vascular reality.

The Hellenic Vascular Surgery Society (https://www.vascularsociety.gr/), which later was renamed as the Hellenic Society for Vascular and Endovascular Surgery(HSVES), was founded in November 1981 in Athens-Greece. The founder and firstpresident of the Society was Professor Panagiotis Balas. Purposes of the HSVES is topromote the Vascular surgery specialtyin Greece, to improve the integration ofvascular surgery advances into medical practice and to maintain high standards ofcare in patients with vascular diseases. To achieve these scopes, the HSVES organizesmeetings, lectures, post-educational courses, and other scientific events independentlyor in collaboration with other relatives Greek or foreign scientific societies andprovides grants to the young junior members. The Greek Society is member of theEuropean Society for Vascular and Endovascular Surgery. The Hellenic VascularRegistry (HEVAR, https://vascularregistry.gr/registry) runs under the auspices of theHellenic Society of Vascular and Endovascular Surgery. Since May 2019, HEVARhas been a member of Vascunet (https://esvs.org/science/vascunet). The Societycurrently has approximately 350 members. Elected president of the Society (2021-2023) is George Geroulakos and General Secretary Konstantinos Moulakakis.

Bulgarian national society of vascular and endovascular surgery was established in 1993. For almost 30 years we have had more than 200 members –vascular surgeons, cardiac surgeons, angiologists, radiologists and other invasive specialties. BNSVES strives to be the major driving force for both scientific and practical activities of every vascular and endovascular specialist by organizing national and international meetings, workshops etc. Our main goal is promoting vascular disease awareness among people and proper, thorough management of this socially and economically significant burden.